Home > All about absinthe > Under her wings: Green Fairys poetic revolt

Showing all messages (6) posted to:

Rimbaud and Verlaine's absinthe induced state of decay is portrayed in Total Eclipse, a play written in 1967 by Christopher Hampton. There is a production currently at Menier Chocolate Factory, 53 Southwark Street, London SE1

This is what they say about Total Eclipse:

"Total Eclipse is the story of renowned 19th century French poets Arthur Rimbaud and Paul Verlaine, who endured a passionate and volatile relationship that has inspired generations of artists from Picasso and TS Eliot to Jim Morrison and Bob Dylan."

WAR - US vs Iran from Iraq

What about the possibility of pulling out of Iraq, letting Iran invade and lose resources fighting their own kind,
and then come in and mop up the dregs?

nemoforone, is that a green fairy inspired thought?

how much did you drink before you came up with such a profound idea?

According to a recent article in SPIN magazine, the goth rocker Marilyn Manson loves absinthe. He was interviewed by writer Jonathan Ames, and during the course of the interview, the two men enjoyed multiple glasses of absinthe. The beginning of the article can be read at http://www.spin.com/features/magazine/covers/2007/05/0706_manson/

Although the entire article isn't available online, fishbowlNY has a summary of the main points covered throughout the interview. This summary can be found at http://www.mediabistro.com/fishbowlny/magazines/jonathan_ames_drinks_absinthe_does_coke_with_marilyn_manson_60343.asp

In relation to this web site, the most interesting point of the summary is that a German distillery is developing a Manson-branded absinthe. This new absinthe is expected to be called none other than Mansinthe.

It will be interesting to see if this new absinthe ever comes into existence, and if so, how well will it be received by absinthe lovers around the world?

Where is this quote from?

Does anyone know where this quote (mentioned on this page) is from?

"When the poet's pain is soothed by a liquid jewel held in the sacred chalice, upon which rests the pierced spoon, the crystal sweetness, icy streams trickle down. The darkest forest melts into an open meadow. Waves of green seduce. Sanity surrendered, the soul spirals toward the murky depths, wherin lies the beautiful madness - absinthe."

Is it from one of Rimbaud' s letters? 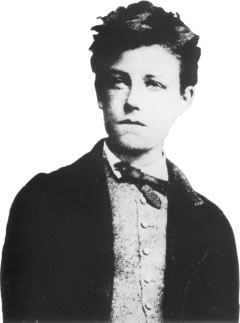 The Green Fairy was no stranger to Arthur Rimbaud, the 'first punk poet'. Rimbaud was a notorious rule-breaker; both his poetry and his lifestyle defied the conventions of his time.

About Rimbaud the rebel and other Green Fairy poets