Green Fairy: The symbol of liberté

The Green Fairy is the English translation of La Fee Verte, the affectionate French nickname given to the celebrated absinthe drink in the nineteenth century. The nickname stuck, and over a century later, "absinthe" and "Green Fairy" continue to be used interchangeably by devotees of the potent green alcohol. Mind you, absinthe earned other nicknames, too: poets and artists were inspired by the "Green Muse"; Aleister Crowley, the British occultist, worshipped the "Green Goddess". But no other nickname stuck as well as the original, and many drinkers of absinthe refer to the green liquor simply as La Fee - the Fairy.

The symbol of transformation

But Green Fairy isn't just another name for absinthe: she is a metaphorical concept of artistic enlightenment and exploration, of poetic inspiration, of a freer state of mind, of new ideas, of a changing social order. To the ignorant drunk, absinthe will forever remain but potent alcohol, perhaps with a bit of thujone "high" thrown in. To the original bohemians of 1890s Paris, the Fairy was a welcomed symbol of transformation. She was the trusted guide en-route to artistic innovativation; she was the symbol of thirst (for life) to Arthur Rimbaud, the first "punk poet": it was the Fairy who guided him -- and his fellow poet and partner Paul Verlaine -- on their quest to escape the conventional reality of their time into the sanctuary of the surreal.

Transformation has always been the fundamental essence of the Green Fairy, for transformation is what she provides on several parallels. During the magical ritual of la louche, the drink itself first transforms from the concentrated, alcohol-rich, deep emerald green liquor into an alluring opalescent, cloudy greenish-white mixture. This, of course, is symbolic of the subsequent transformation that shall take place in the drinker's mind. As the cool water liberates the power of wormwood oil and the other herbal ingredients from the green concentrate, so will new ideas, concepts and notions be set free in the mind of the drinker -- be he a poet, an artist, a scientist, or the common man on the street.

The goddess of artistic rebellion

Is the above a fanciful, perhaps absinthe-induced

description of the powers of the Fairy? Let the reader -- or perhaps the drinker -- decide for himself. Let there be no doubt, however, that the turn of the last two centuries produced art, poetry and ideas that were, for their time, shockingly original, rebellious and challenging to the extreme. This was the time of Rimbaud and Verlaine, who pursued their quest of challenging convention whenever they came across it. Their antics caused outrage across Europe at the time, but their ingenious poetry -- a reflection of their search for the true meaning of life -- remains with us to this day.

Inspiring and liberating, the Green Fairy was a powerful symbol of the avant-garde elite that gathered in Parisian cafes at the turn of the last two centuries. In this sense, the Fairy was what pot later became to the hippie subculture of the 1960s. In her company -- or under her influence -- Belle Epoque writers and artists became lucid commentators on an emerging new world. With the stroke of a brush or a pen, they experimented, they rebelled, they provoked, and so they successfully subverted the stuffy conventions of the time.

L'Absinthe: One case in point 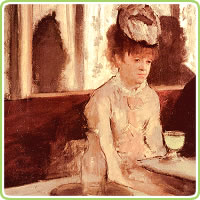 "What a slut," declared George Moore, a British art critic, when, in 1893, he first set his eyes on Edgar Degas's painting L'Absinthe. The "slut" in the picture was not the Green Fairy, but a French actress portrayed drinking absinthe in a Parisian cafe. She was one Ellen Andree, the painter's friend, shown in a reflective moment in a cafe called La Nouvelle-Athenes.

Perhaps not surprisingly, this piece of art proved a little too nouvelle for the straight-laced Victorian taste across the Channel. What was surprising though was the intense Francophobia that the painting ignited within the London art world. First, the picture was hissed at and booed out of a Christie's auction room. Soon, the English were raging against anything French: the French culture (or the lack of it, as some would put it), the "French poison" (absinthe) and even the "French disease" (syphilis).

The trouble with L'Absinthe was, of course, it was too modern for its time. Absinthe was the usual scapegoat, but it wasn't absinthe itself that caused the hysteria: it was the idea of a woman drinking it. The picture challenged the established "natural" order. It challenged the conventional understanding of the place of a woman in the society. It defied the traditional notions of decency, morality, and propriety: the enjoyment of a drink in a public cafe apparently wasn't a pleasure available to a polite lady of the day. It wasn't until many years later that Degas's painting became widely appreciated as a true masterpiece.

The rage that Degas's L'Absinthe caused in England was an expression of a pre-existing nervous fear that the decadent ways of the Continent might reach the shores of the British Isles, too. Two years previously, Marie Corelli, the English author of "Wormwood: A Drama of Paris", wrote:

"The morbidness of the modern French mind is well-known and universally admitted ... the open atheism, heartlessness, flippancy, and flagrant immorality of the whole modern French school of thought is unquestioned."

"It must also be remembered that in the many French cafes and restaurants which have recently sprung up in London, Absinthe is always to be obtained at its customary low price -- French habits, French fashions, French books, French pictures, are particularly favoured by the English, and who can predict that French drug-taking shall not also become a la mode in Britain?"

Meanwhile in Paris, the Green Fairy had long been a welcomed guest in the Nouvelle-Athenes cafe, the place Degas depicted in L'Absinthe. Sarah Bernhard drunk there, as did Van Gogh, Lautrec, Gauguin, Manet, Monet and other famous and not-so-famous bohemians. Over a glass of absinthe, they painted and wrote, discussed and shared ideas, or just gossipped, sang or read poetry.

As a metaphorical creature locked within a bottle of absinthe, the Green Fairy continued to earn her reputation as the artist's muse all over the Continent.

The abrupt end came in the second decade of the twentieth century when the Belgians, then the Swiss and the French banned absinthe. By that time, the Green Fairy had prompted a generation of artists to produce countless works dedicated to, or inspired by, the curious creature with green wings.

Got something to say about the Green Fairy?

16 people have
posted messages
to this page. 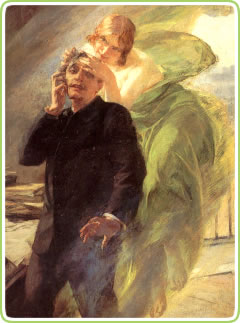 Out of the bottle: The Green Fairy at work, liberating the mind of a poet. The dramatic pose of the poet and the misty-green appearance of the painting symbolise the effects of absinthe. ('The Green Muse' by Albert Maignan, 1895.)

About the Green Fairy

Where there is a will, there is a way, and folks do go out of their way for a chance to meet the "Goddess" -- like the guy who claims the Green Fairy can be summoned by soaking wormwood in alcohol. Well, no, it cannot... sorry, but it just doesn't work like that. Unless you own a still, there is no way you will ever make real absinthe at home.

(I'm beginning to wonder why we called this part useful links...)

Anyhow, let's move onto the useful / interesting stuff... This page would not be complete without mentioning MsJekyll's Green Fairy page. A modern-day absinthe icon, MsJekyll published an absinthe website years before the current absinthe revival. Been there, done that - well before the current bunch of absinthe 'experts' appeared on the web. Don't miss MsJekyll's poetry - dark but beautiful.