Is absinthe strong in alcohol?

Absinthe contains a lot more alcohol than most other liquors. Actual content varies by brand, but many absinthes are nearly twice as alcoholic as, say, scotch, gin or vodka. To put it another way, a shot of strong absinthe roughly equals two shots of whisky or similar spirit.

For easy reference, here is an example of alcohol content in a few of the better-known brands:

Unexpected over-indulgence is a genuine possibility with absinthe, especially for newcomers who assume the drink compares to other spirits in alcohol strength. Recently, an English aristocrat claimed that absinthe sent him "doolally" (mad) in his defense against a drink-driving charge. It transpired the man had spent some hours "in the company of the Green Fairy" (as absinthe is known), a fact he later used to "explain" the unusually high level of intoxication he was apparently under when stopped by the cops. Putting the blame on the Fairys secondary, presumably thujone-induced effects must have seen a convenient excuse. The fact remains, however, that the man admitted having drunk three or four absinthes that afternoon -- and that, in alcohol content, equals some six to eight glasses of scotch.

With absinthe's popularity on the rise again, many other anecdotes of inadvertent over-indulgence are being told -- and newcomers to absinthe are not the only ones at risk. Most seasoned absintheurs also admit to having indulged a little too much at least once or twice: 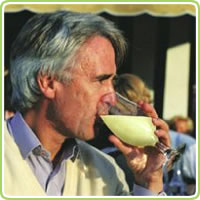 "As far as alcohol intake goes, the Fairy turns out to be a deceptive little devil," says Ben Romano, a retired American professor who lives in the south of France. "Consider the thirst of a hot summer afternoon: would you down a triple whisky? Unlikely. Now, how about a cool, smooth, creamy absinthe-ice water louche? Oh sure, it's easy to have one too many. It tastes good, you know."

Louche'ing absinthe with iced water does have the desired effect of diluting the strong green liquor, and, apparently, this is how absinthe should be drunk anyway. To connoisseurs, the ritual of la louche is an essential part of the absinthe experience; drinking absinthe 'neat' is something akin to a crime.

But however you drink your absinthe, moderation is the key. Someone with the idea to get drunk, smashed, pie-eyed or whatever you wish to call it will do so -- with or without absinthe.

So long as you remain mindful of absinthe alcohol potency, the Green Fairy will prove the most pleasant of companions. In sensible quantities, she will reward you with a delightfully open-minded, clear-headed inebriation which no other beverage can match.

With absinthe, the effects of alcohol are countered by the stimulants present in the herbs from which the emerald liquor is made. As a result, absinthe-induced inebriation is quite different to the usual bleary-eyed incoherence that comes from drinking too much vin de plonk or spirits.

"I had long used a burgundy/whisky/coffee combination to help me write (alcohol for inspiration, coffee for structure) and here was the whole shebang in one compact package."

"After my tenth glass I sat down to write, and that's when I got a grip on what that difference was. I was drunk, yes, but not whisky or wine drunk, I was drunk and clear-headed. I discovered I could write with a strange sense of cognizance when I should have been scratching unintelligible ravings on bar napkins. The alcohol wave was rolling through me, but instead of drowning, I was somehow above it, coolly observing."

So there you have it. One of strongest alcoholic drinks ever made, but one that apparently keeps you alert despite its abundant alcohol content.

Got something to say about absinthe's strength, effects, alcohol content?

23 people have
posted messages
to this page. 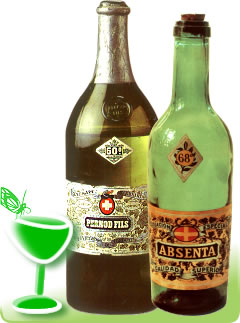 Many absinthes beat most other liquors in terms of alcohol strength, so indulge responsibly! But absinthe's high alcohol content is only one part of the story...